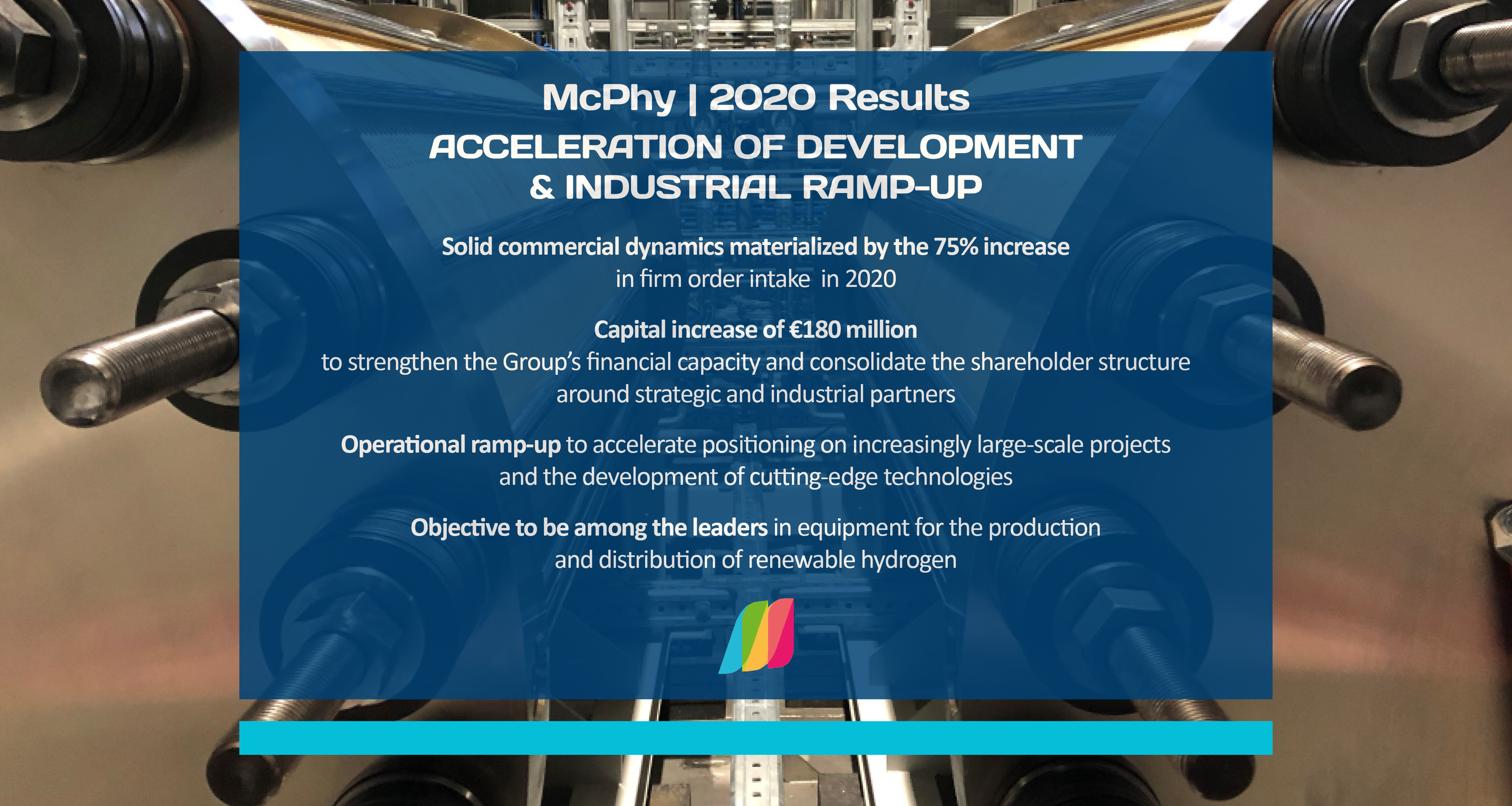 Thanks to this momentum and the tremendous commitment of its team, McPhy experienced in 2020 a very strong acceleration of its commercial and industrial development in 2020.

Laurent Carme, CEO of McPhy, states: “The year 2020 marked a decisive turning point for the entire hydrogen industry. The launch of major public projects in Europe with the hydrogen strategy unveiled by the Commission in June, and in France with the announcement in September of the €7 billion investment plan, made clear the fantastic potential of renewable hydrogen to succeed in the energy transition. Thanks to this momentum and the tremendous commitment of its team, McPhy experienced in 2020 a very strong acceleration of its commercial and industrial development in 2020. With more than 44 MW of electrolyzers and 35 hydrogen stations installed or in the process of being installed, orders up 75% to €23 million and €198 million following the €180 million fund-raising in October 2020, McPhy now has the means to achieve its ambitions: to successfully complete the major contracts signed in the past few months, to simultaneously develop the new generations of electrolyzers and stations needed to remain at the forefront of its market, and to move to industrial scale. Our ambition is to become a major European leader in hydrogen.”

During the financial year, the commercial dynamic remained very strong despite the epidemic context. Order intake at 31 December 2020 was €23 million, an increase of 75% compared to the previous year. McPhy was able to position itself on projects in France and Europe that are increasingly significant in line with the Group’s strategy, and in particular:

McPhy has also concluded over the period agreements relating to significant new projects in France to equip the “mobility” component of a zero-emission hydrogen ecosystem in the Centre-Val de Loire region (8).

During the year, McPhy also deployed several major projects, including: 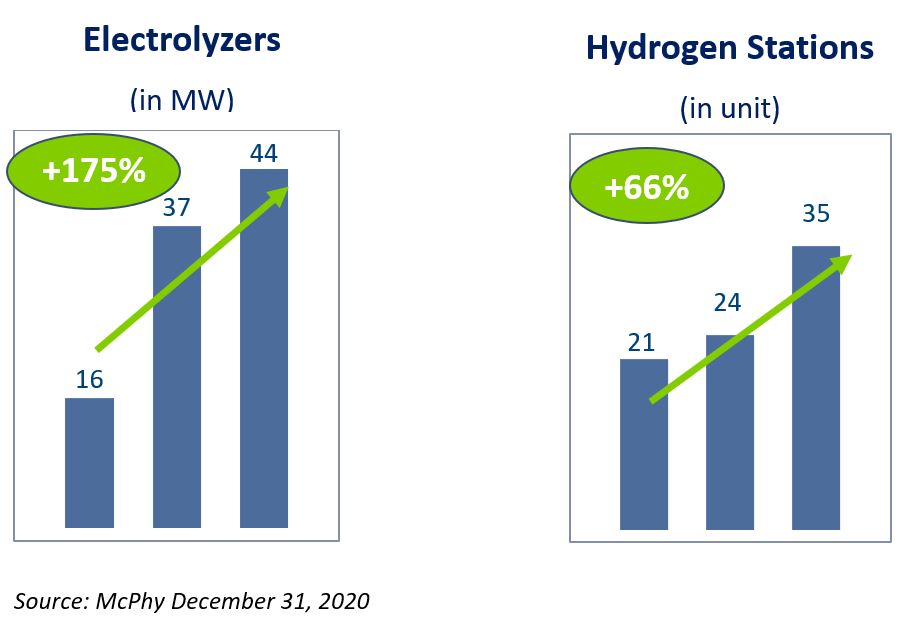 As of December 31, 2020, the Group’s 2020 recurring operating loss amounted to €8.8 million. The decline in profit from recurring operations over the year reflects the Company’s strong development and the structuring efforts undertaken in 2020.

Purchases consumed increased in proportion to revenue by 20%, reflecting the growth in activity.

The reinforcement and structuring of the teams resulted in a 24% increase in personnel expenses, including a 3% increase due to the non-cash IFRS2 restatement. The recruitment of 12 people over one year brings the number of employees to 110 at December 31, 2020.

External costs remained stable and the Company continued to invest and pursue its efforts in research and innovation. These efforts will continue and intensify in fiscal year 2021 to keep pace with market growth.

The Company was impacted by an unfavorable effect compared to fiscal year 2019, as nearly €3 million of repayable advances waiver had been recognized as revenue in 2019. Excluding this effect, the 2019 result would have been equivalent to the 2020 result, i.e. -€9.3 million.

Operating loss for the year ended December 31, 2020 was €9.0 million and net income was €9.3 million, reflecting the low level of financial expenses, which were mainly impacted by exchange rate fluctuations. This result reflects the strong investment strategy initiated by McPhy in 2020 for the recruitment of talent, the development of innovative solutions in electrolyzers and stations and the industrialization of its offer. This policy will continue over the financial year 2021 and the next years in line with the “use of proceed” of the October 2020 raising. This policy forms part of a strong acceleration in the hydrogen market and a generalized approach of investment in the future by all the stakeholders in the value chain.

In order to secure its growth and strengthen its partnerships through capital ties, the Group carried out a capital increase in October 2020. Several times oversubscribed, the Offer enabled McPhy to raise €180 million with a subscription price for the new shares representing a very limited discount. The Group has thus strengthened its shareholder base, on the one hand, by consolidating its relationship with the Group’s historical strategic shareholders:

Emilie Maschio, CFO of McPhy, comments: “Thanks to this transaction, McPhy has significantly strengthened its financial capabilities and attracted new, well-known shareholders. The success of this fund raising symbolizes both the confidence and commitment of the Group’s financial and industrial partners as well as the growing interest of investors in zero-carbon hydrogen solutions. At the end of the year, McPhy’s new stock market status enabled it to be included in two new prestigious indices: the MCSI World Small Cap and the SBF 120.”

The Group’s industrialization phase is a key step in increasing competitiveness and enabling profitability in the short to medium term. This transition to industrial scale will only be possible by continuing and accelerating investments in terms of development, recruitment, tools and equipment.

McPhy intends to remain at the technological forefront in its two equipment segments, continuing its R&D investments in order to meet the challenges of the massification of the hydrogen market and to develop the new generations of its equipment. The Group is focusing on developing its capacities both in electrolyzers in order to be able to position itself on projects over 100 MW and in hydrogen stations (>2 tons per day).

The Group is also stepping up its operational ramp-up and the industrialization of its production facilities in order to gain competitiveness and foster cost synergies. McPhy will acquire a new plant in France, enabling it to increase the capacity of its hydrogen stations from 20 stations to 100 stations per year by 2022. At the same time, the San Miniato site in Italy, after some investments, will in the first instance enable the Group to reach a capacity of 300 MW per year and the Group is already considering several possibilities for locating its future Giga Factory with an additional capacity of 1,000 MW per year.

In parallel with these developments, McPhy is deploying its teams and strengthening its organization and processes. Thus, Mr. Antoine Ressicaud has joined the Company as Chief Manufacturing & Procurement Officer, Mr. Olivier Juino also joined the Company at the beginning of the year as Strategy director, Mr. Alexander Picco has been appointed as Project Management Officer in 2020. All three are members of McPhy’s Executive Committee, which was further structured by area of expertise in September 2020 (11).

As of December 31, 2020, McPhy counted 110 employees who are experts in zero-carbon hydrogen solutions. The acceleration of the strategic deployment should take shape in 2021, notably through the recruitment of some 50 new employees. The Group’s strength lies in its men and women, whose cultural diversity is represented by 20 different nationalities. This richness enables the Group to benefit from a great flexibility and agility.

In order to enhance its offer and participate in the promotion of renewable hydrogen, McPhy is deeply committed to its industry. Mr. Laurent Carme, its Chief Executive Officer, has just been appointed to the National Hydrogen Council, a French organization whose role is to structure exchanges between the State and the various stakeholders in the implementation of the national strategy for the development of decarbonated hydrogen. In France, McPhy is also a long-time active member of France Hydrogène (formerly Afhypac).

At the European level, McPhy is also active in Hydrogen Europe, the leading European association promoting zero-emission hydrogen with more than 185 members.

Finally, its commitment is also expressed at the international level through its participation in the Hydrogen Council, a global initiative bringing together leaders of major companies who share the idea that hydrogen is key to the energy transition.

In parallel with these commitments, McPhy is working to build strategic alliances that are real levers for its products and solutions. During this fiscal year, the Group collaborated with major partners in joint projects:

The development of hydrogen in the world experienced a real breakthrough in 2020. In a context of climate emergency made even more acute by the Covid-19 crisis, initiatives have been multiplied at both European and national levels, illustrating the new understanding of the role that the hydrogen sector will play in the energy transition. The Group’s offer is in line with European ambitions to meet market expectations, namely 6 GW by 2024 (13) and 750 station projects by 2025 (14).

In this promising context, strengthened by the emblematic contracts recently won, the growth of its installed base in France and internationally, and its technological lead, particularly in alkaline electrolysis, the most mature and competitive technology in the industry, McPhy aims to become one of the leaders in the production and distribution of hydrogen equipment.