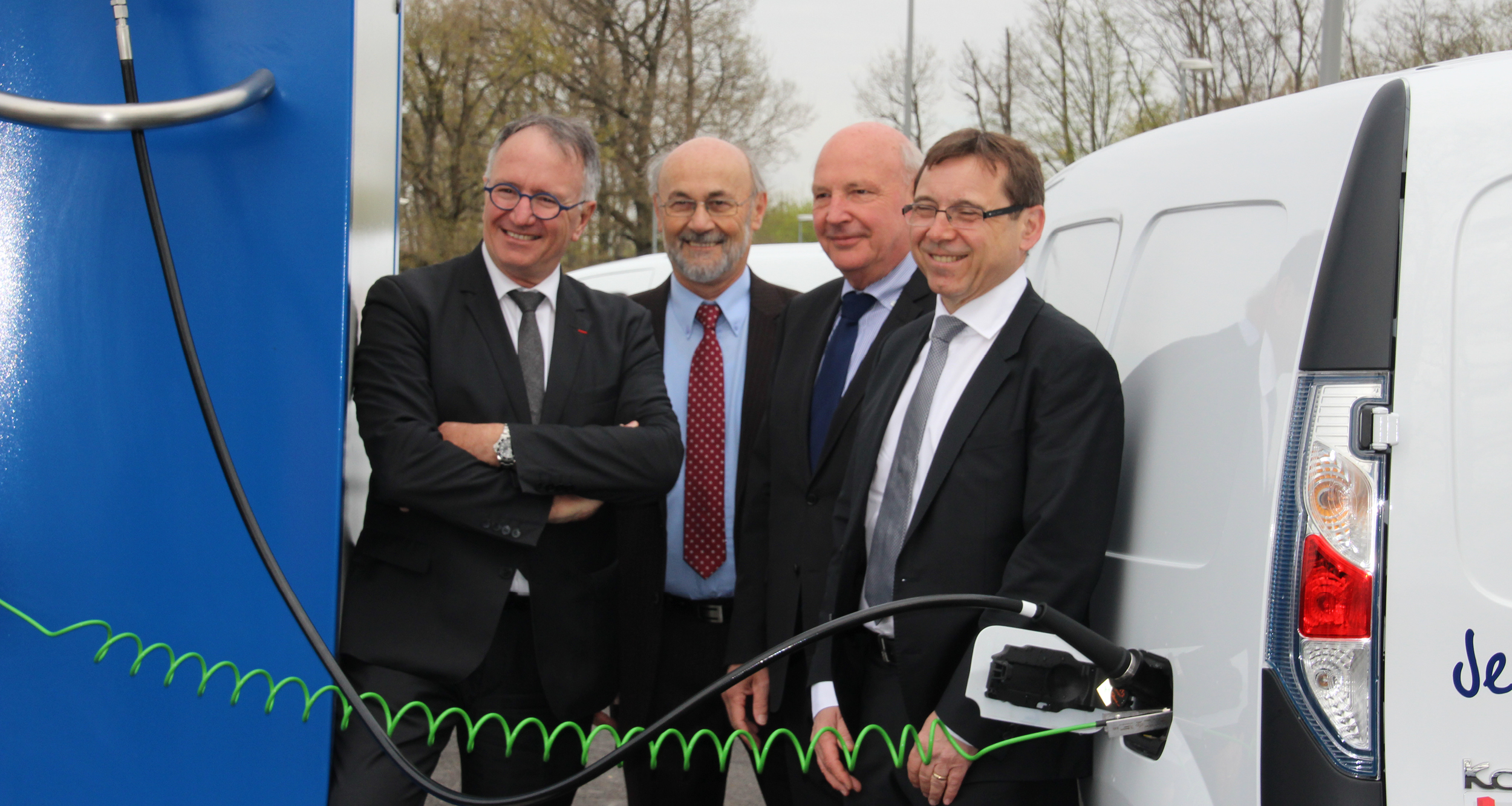 Commissioning of the first H2 refueling station in France producing green hydrogen on!

On 11 April 2017, the hydrogen refueling station of the FaHyence project was officially commissioned in the presence of Mr. Roland Roth, President of the Communauté d’agglomération Sarreguemines Confluences (CASC) and Didier Vaucois, the EDF Grand Est Regional Director, as well as partners of the project and hydrogen vehicle users. This represents the first hydrogen refueling station in France able to produce hydrogen on-site and on-demand from renewable energies for sustainable mobility!

This achievement is the product of two years of close collaboration between CASC, EDF, McPhy and EIFER who have associated their expertise to design, scale and build an installation unique in France: the station is equipped with an electrolyzer that produces hydrogen on-site from green electricity and water. Symbio delivered six Kangoo H2-type vehicles to different public and private users who now use hydrogen for their daily professional activities. 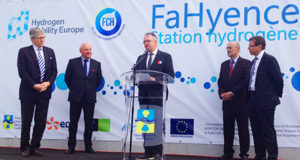 As part of its energy transition strategy, the CASC developed a climate plan that includes four strategic priorities focusing on low carbon mobility, and including hydrogen. The “FaHyence project” consists in creating a multi-energy service station that allows users to refuel their electric vehicles with electricity or hydrogen produced on-site. A CNG refueling station is also under study. The CASC is the owner and operator of the station.

EDF, through its Grand Est Regional Delegation and its R&D, as well as the EIFER Institute, co-developed the demonstrator and provided their technical expertise to the CASC, from scaling the equipment to the station’s installations, as well as in obtaining financing and developing a a monitoring and intelligent control system. Electrical energy and in this way the consumed consumed during renewable energy production peaks, outside the peak consumption periods. EDF also supplies the station with green energy guaranteed by certificate of origin.

McPhy designed, manufactured and integrated the first hydrogen system in France, combining an innovative high energy-efficient electrolyzer with a hydrogen station with a capacity of 40 kg per day. Adapted to different vehicle models and with a capacity for 25 recharges per day at 350 bar, this station contributes to cross-border hydrogen mobility with Germany and Benelux with refueling completed in just a few minutes. Autonomous, the station’s electrolyzer system is configured to trigger the control for the production of hydrogen automatically and ensures the continuous availability of the equipment.
McPhy supports the CASC in operating the equipment throughout the project and also supplied a temporary hydrogen refueling during the design and construction phase.

Symbio has developed a Renault Kangoo ZE-type (electric/hydrogen) equipped with a 22 kWh battery and a 5 kW fuel-cell serving as a range extender which recharges the battery in real-time. This solution makes it possible to double the vehicle’s autonomy from 150 km to 300 km. The battery can also be recharged on the electrical network when the vehicle is parked or by a fuel cell installed in the vehicle. A Kangoo ZE-H2 can carry 1.8 kg of hydrogen and be refueled in just a few minutes in an hydrogen station.
FaHyence falls within the scope of H2ME European project, financed by the FCH JU European program that seeks to deploy 29 hydrogen refuelling stations and more than 300 vehicles by 2020.

The FaHyence project in this way is accelerating the energy transition for travel by offering a concrete solution for sustainable mobility, while at the same time addressing the needs of private and professional users in terms of autonomy and refueling time. Finally, it strengthens Europe’s footprint by locating the first French hydrogen refueling station able to produce hydrogen on-site and on-demand in one of its main mobility corridors at the crossroads of France, Germany and Benelux.

| About the Communauté d’Agglomération Sarreguemines Confluences

The Communauté d’Agglomération Sarreguemines Confluences or CASC is a French regional inter-community authority located at the frontier of the French Grand Est region and Germany. It includes 38 districts and 66,000 inhabitants, including the town of Sarreguemines.

After obtaining the French green energy label (“Territoire à Energie Positive pour la Croissance Verte” or TEPCV), the CASC has chosen to gradually incorporate a cross-cutting climate and energy approach in its policies. Accordingly, for nearly 8 years, an important program of actions has been deployed locally to develop a number of projects for the territory’s energy transition and economic development and to raise awareness of the population to sustainable development issues. With the support of its local partners, the CASC has decided to focus its efforts in the area of sustainable mobility on alternative and innovative solutions such as hydrogen to reduce greenhouse gas emissions and position the territory in strong growth potential sectors.
http://www.agglo-sarreguemines.fr

A key player in energy transition, the EDF Group is an integrated electricity company, active in all areas of the business: generation, transmission, distribution, energy supply and trading, energy services. A global leader in low-carbon energies, the Group has developed a diversified generation mix based on nuclear power, hydropower, new renewable energies and thermal energy. The Group is involved in supplying energy and services to approximately 37.1 million customers, of which 26.2 million in France. The Group generated consolidated sales of €71 billion in 2016.

By investing more than €1 billion a year in this territory, EDF is the largest industrial investor in the Grand Est region. EDF partners with local authorities on issues relating to energy transition: that is the reason for our engagement to promote new means of transportation associated with electrical mobility exemplified by this local experimentation. By putting innovation and research at the heart of its strategy, the EDF group demonstrates its know-how and engagement in these territories. EDF is listed on the Paris Stock Exchange.
https://www.edf.fr

Created in September 2001, EIFER, the European Institute for Energy Research, is an economic interest grouping between EDF (Electricité de France) and KIT (Karlsruhe Institute of Technology). Located in Karlsruhe, Germany, EIFER has a multidisciplinary team of 100 people of different nationalities. In partnership with other international research centres, EIFER’s goal is to create value for its two members and their respective partners: cities, local communities and industries. EIFER focuses on three strategic priorities: sustainable cities, analysing trends and interactions within energy systems, developing local energy concepts and solutions. A team of approximately 15 researchers is devoted to work on hydrogen and fuel cells.
https://www.eifer.kit.edu/

Symbio is the French hydrogen leader offering innovative sustainable mobility solutions that extend electric vehicle ranges for greater autonomy make it possible to reduce air pollution in cities and contribute to a low-carbon economy. Symbio designs, manufactures and sells fuel cell vehicles (Kangoo ZE-H2) and hydrogen fuel cell kit systems (5 kW to 300 kW) for integration in all types of vehicles for an operating use identical with internal combustion engines. Symbio has positioned renewable hydrogen energy at the heart of its development strategy. Symbio is in this way pursuing development of clean hydrogen energy applications by participating in different cutting-edge development programs with key industrial and research partners like CEA, ENGIE and Michelin.
http://www.symbiofcell.com

“These activities have received funding from the European Union under the HORIZON 2020 program through the Fuels Cells and Hydrogen Joint Undertaking under subsidy agreement number°671438.
The authors of this document have sole responsibility for its content, and the European Union is not responsible for any use that may be made of the information contained therein.”