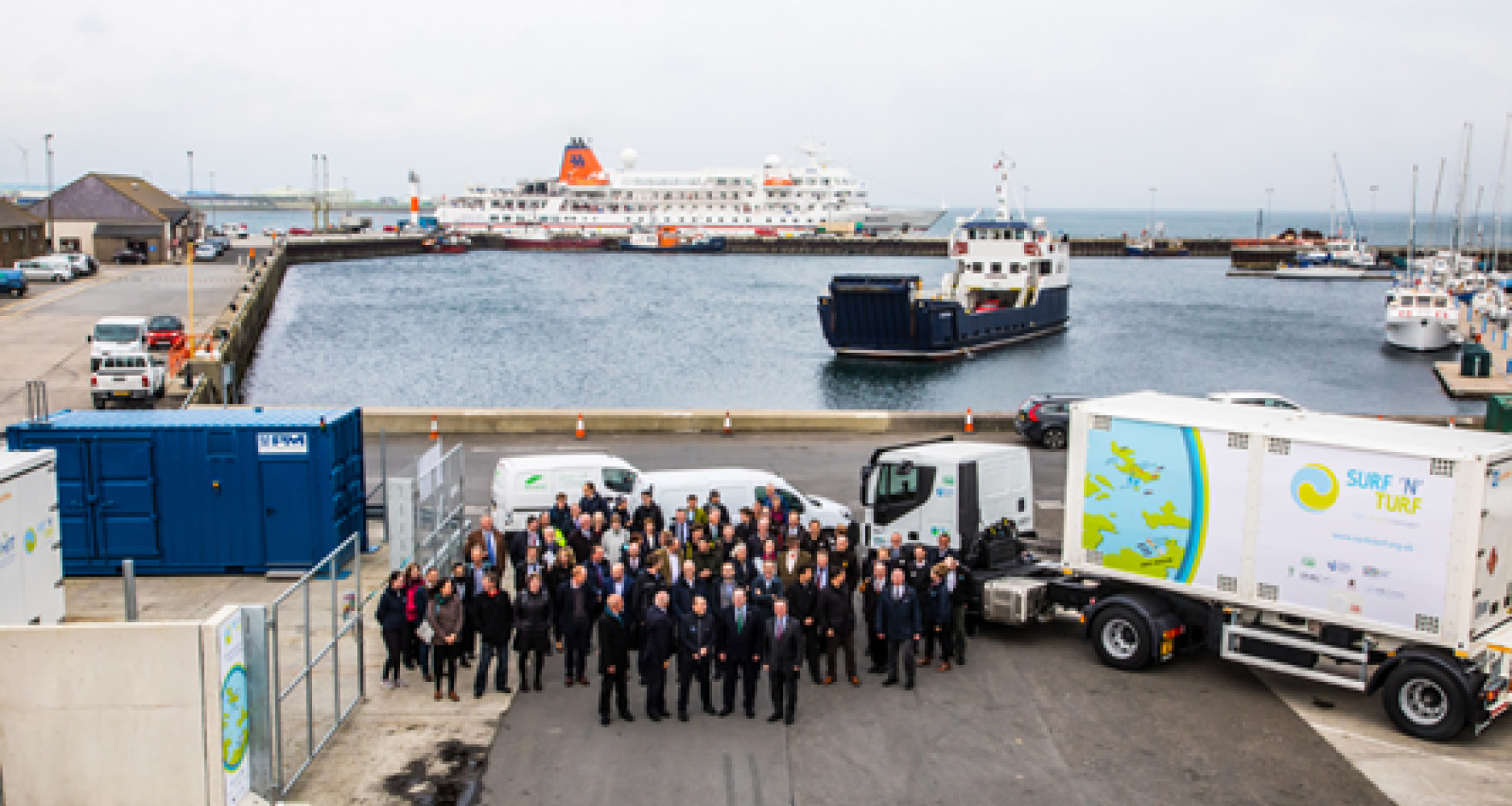 18 june 2018 – At Today’s Smart Shipping Symposium hosted by the City of Glasgow College Faculty of Nautical Studies, Jim McColl OBE, Chairman and Chief Executive of Clyde Blowers Capital announced that Port Glasgow-based Ferguson Marine Engineering Limited has successfully led a European consortium in a bid for EU funding support to pave the way for the building and launch of the world’s first sea-going car and passenger ferry fuelled by Hydrogen. 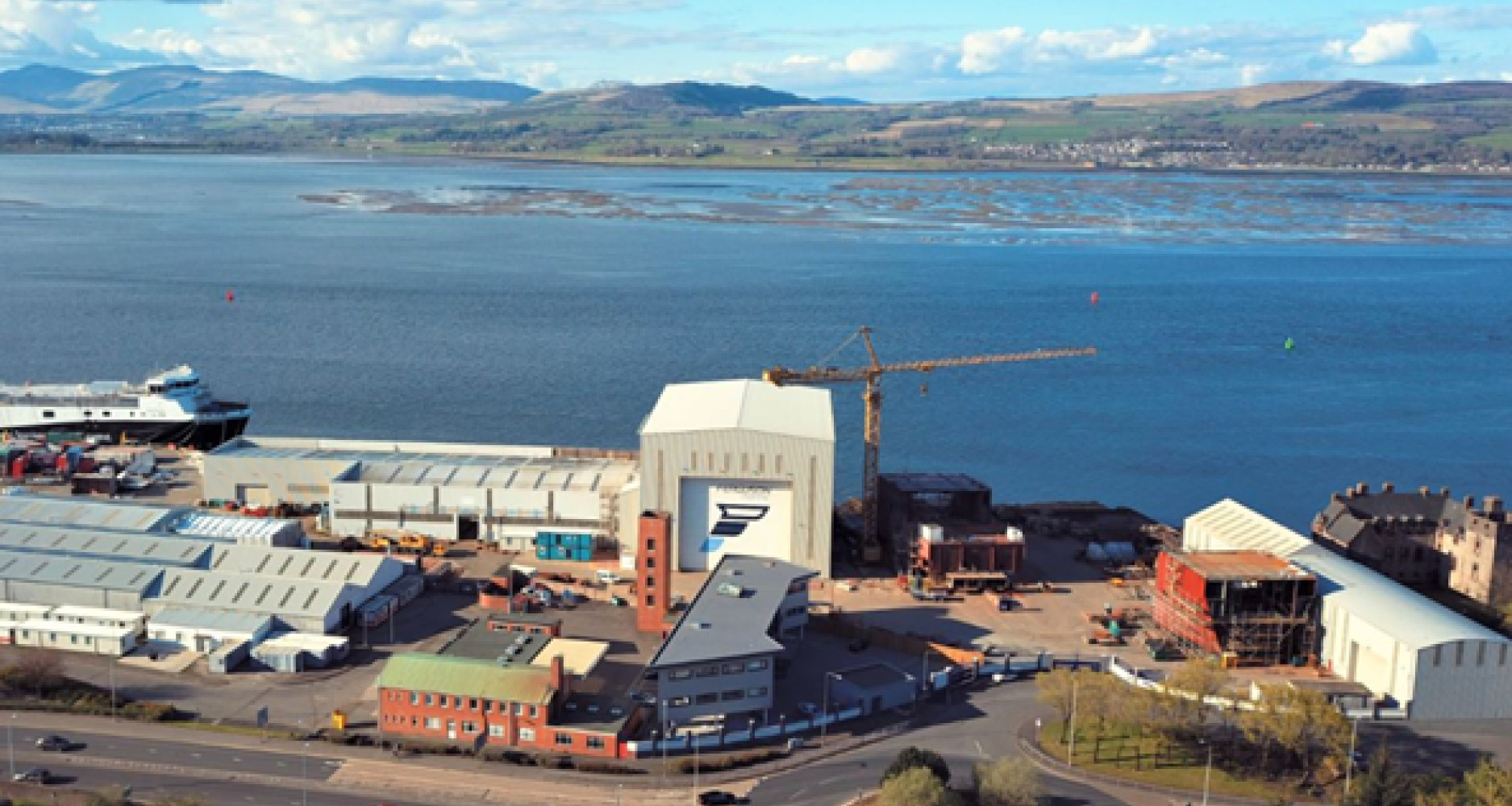 £25 million investment has transformed Ferguson Marine into one of the most advanced shipyards in the world, leading the way with quality production and Innovation

The supported development is expected to cost around €12.6 million of which €9.3million has been awarded by the European Union’s Horizon 2020 research and innovation fund.

Employing Ballard technology, already proven across millions of miles of road transport, the initial objective is to construct and prove the vessel’s modular drive train onshore, testing for stress and durability under conditions employing real-world data from existing vessels.

The successful test will allow a vessel to be constructed, in the already assured knowledge that such a vessel can operate safely and efficiently around Scotland’s challenging coast. The vessel is planned to operate in and around Orkney – which is already producing hydrogen in volume from constrained – and hence otherwise wasted – renewable energy.

Destination Kirkwall: The current Shapinsay ferry with the chosen route for HYSEAS III project in the background. HYSEAS III will combine with Surf N Turf hydrogen project to provide the replacement vessel with a Hydrogen fuelling facility

Chief Naval Architect Chris Dunn of Ferguson Marine said, “Over recent years Ferguson Marine has been at the global forefront of green marine propulsion technology development. This exciting project is yet another positive step on that journey and puts us firmly on track to deliver the world’s first zero emission, hydrogen fuel cell powered commercial ROPAX ferry in 2020.”

Ferguson Marine Chief Executive, Gerry Marshall, added “We now have one of the most innovative and competitive shipyards in Europe which is capable of delivering ground-breaking projects for Inverclyde, Scotland and beyond. HySeas III is a living example of how it can be possible to lead the world in marine technology.”

Project Coordinator, Dr. Martin Smith from the University of St. Andrews said, “This is a very exciting stage to be at now. This opens the real possibility of Scotland and her key European partners delivering another world-first not simply in ship-building but also in building sustainable local sources of fuelling in parallel.”

Jim McColl OBE, whose Clyde Blowers Capital now owns the once-threatened shipyard, commented, “Ferguson’s was the last full-service commercial shipyard on in the River Clyde. Since taking over in 2014, we have invested £25 million to bring the yard up to the world-class standards with a new, skilled workforce, that has provided the confidence in leading this hugely important, ground-breaking project.”

Previously in 2012, Ferguson’s launched the MV Hallaig, the world’s first ever battery hybrid ferry. The redeveloped yard achieved another first in November 2017 when it launched the MV Glen Sannox, the first UK ferry build with dual-fuel capability (marine diesel & LNG). The Glen Sannox’ sister vessel is currently under construction at the shipyard.

The University of St Andrews, the 3rd Oldest University in the English-speaking world, is home to world-class research and development in hydrogen, battery and other energy technologies. A key part of the development aspect is the transferal of knowledge and expertise into real-world applications – not least in stretching the boundaries of what has previously been thought of and achieved.

Dr. Smith from The University, along with Jim Anderson at CMAL (Caledonian Maritime Assets Limited) initiated the HySeas programme in 2012. Support from Scottish Enterprise allowed the idea to be taken from an early feasibility study to the point where the focus can now shift into test and delivery.
Dr. Smith previously played a leading role in the introduction of hydrogen buses into Scotland, a development which is now set to move beyond Aberdeen with Dundee currently following and other Scottish cities considering fleets of their own.

Support will be provided by Horizon 2020, the EU’s largest ever Research and Innovation programme to date with a budget of c.€80 billion over 7 years (2014 to 2020).
The HySeas III project formally begins on the 1st of July. 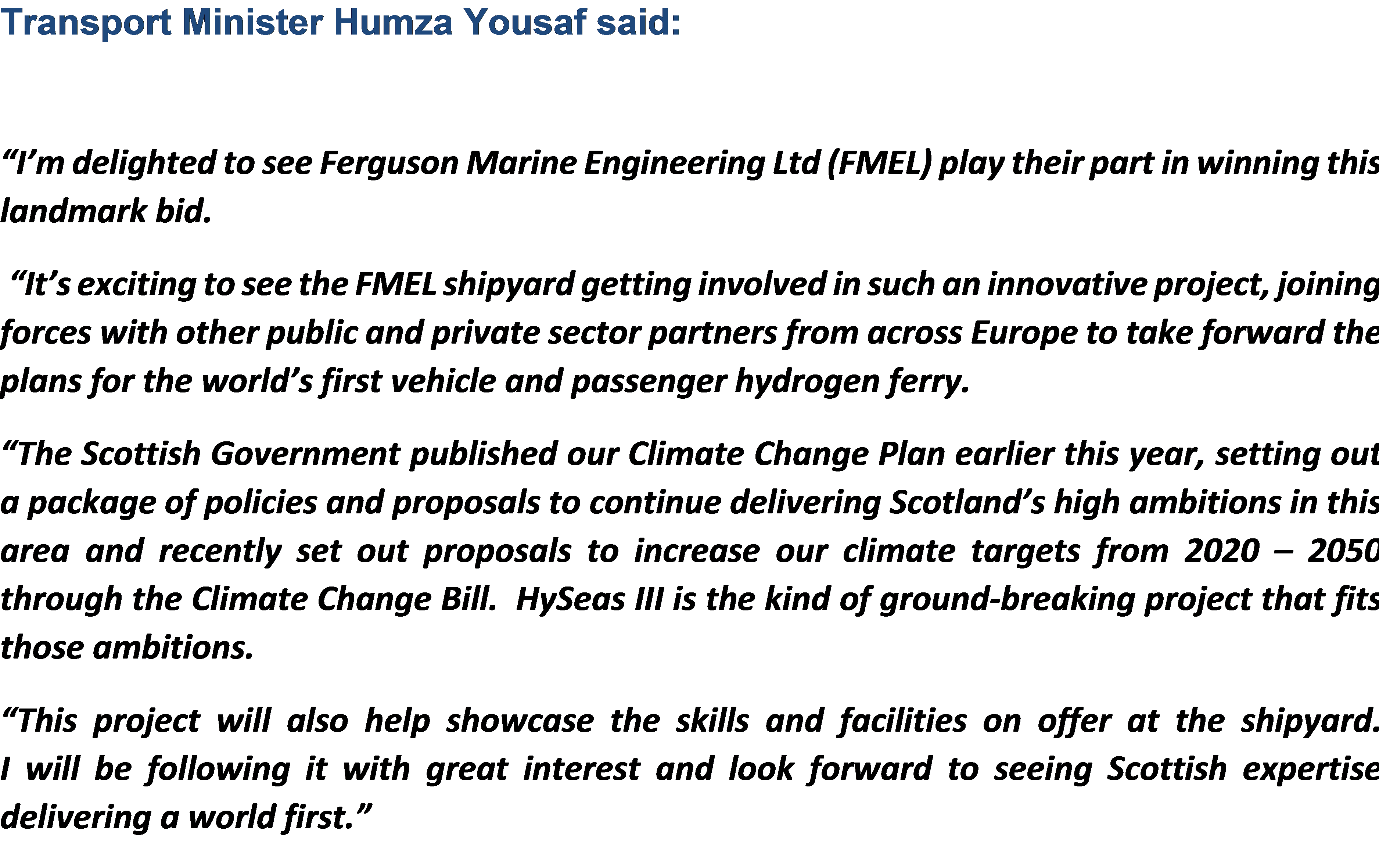 “Hydrogen is simply unavoidable if we are to succeed in the energy transition for a better, cleaner and safer future. We are delighted to be part of this unique project which opens up the future of decarbonized sea freight.” | Pascal MAUBERGER, McPhy’s CEO

“Hydrogen is simply unavoidable if we are to succeed in the energy transition for a better, cleaner and safer future. By land, rail, air or by sea, hydrogen shows itself an efficient, reliable and competitive energy.
This is what we aim to demonstrate during this specification phase, and we’re proud to bring our expertise and our “Augmented” electrolyzers and hydrogen stations – for boats, but also in the future for hydrogen trains or buses – to contribute, alongside the HySeas consortium, to design the project’s landside infrastructure.
We are delighted to be part of this unique project which opens up the future of decarbonized sea freight.”

Find out more about the whole partners and their testimonials by downloading the full PR (PDF).

This project has received funding from the European Union’s Horizon 2020 research and innovation under grant agreement No.769417