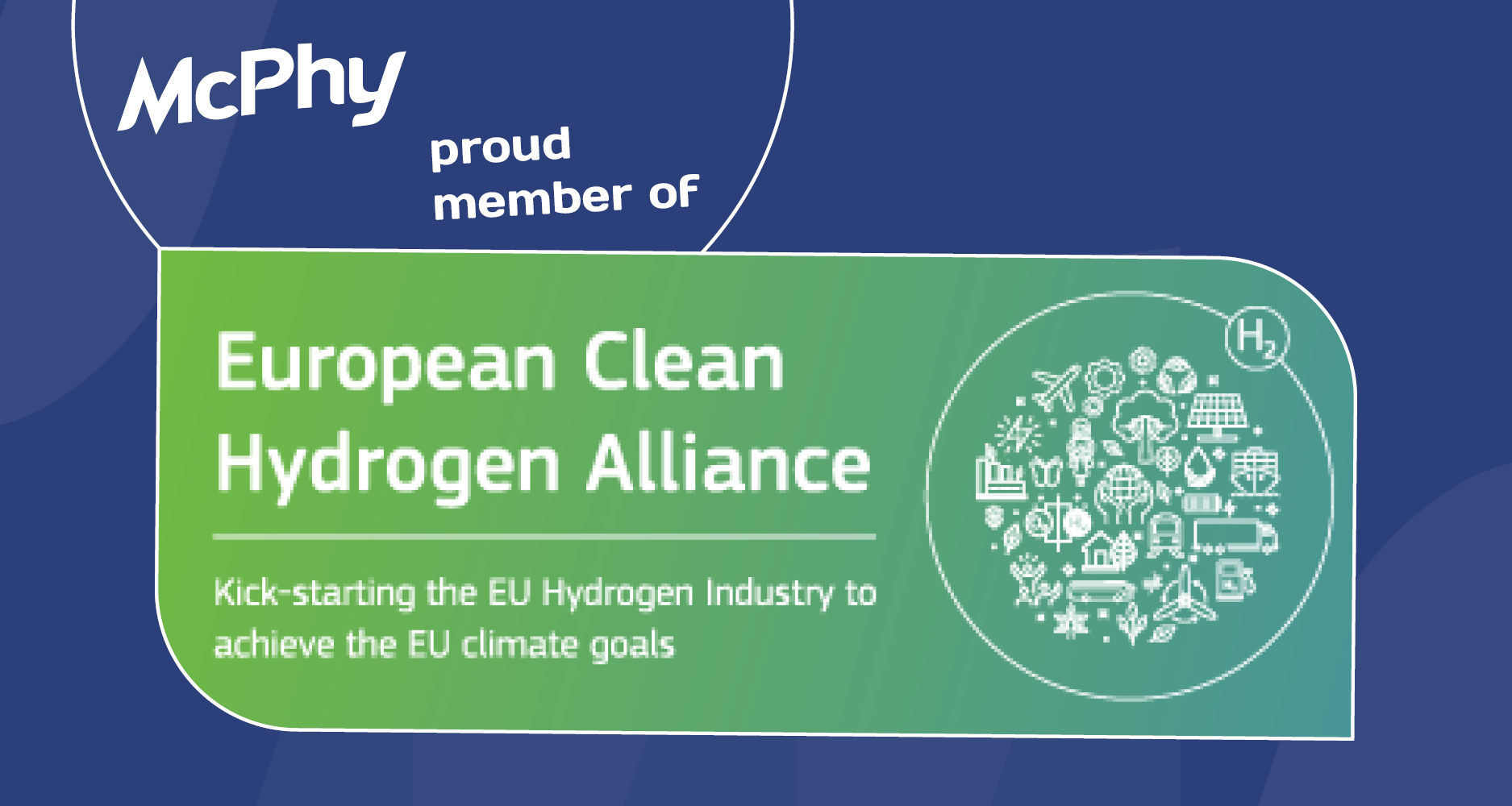 McPhy is proud to be a member of the European Clean Hydrogen Alliance!

The signing of the Alliance confirms McPhy’s desire to deploy zero-carbon hydrogen on a large scale in the service of the fight against air pollution and climate change.

Within the Alliance, we will work alongside our peers to accelerate the deployment of zero-carbon hydrogen solutions at the heart of industries, energy systems or in favor of the emergence of new forms of clean mobility.

In line with this commitment, McPhy contributed to sharing its expertise and knowledge of hydrogen during the European Hydrogen Week which took place from 23 to 27 November 2020.

ECHA: a professional alliance to support the deployment of Europe’s industrial strategy

The Clean Hydrogen Alliance aims to deploy green hydrogen by 2030 and thus achieve carbon neutrality by 2050 in the European Union. Since July 2020, the alliance is? part of Europe’s new industrial strategy, at the heart of which the development of carbon-free hydrogen holds a central place.

As a reminder, the alliance is open to stakeholders in industry, mobility, production and distribution of hydrogen, public and private, whose want to contribute to the development of renewable or low hydrogen-carbon in Europe.

Towards a dynamic hydrogen ecosystem in the EU

To achieve this, ECH2A has set itself an investment program to facilitate the implementation of hydrogen development actions and technology deployment across Europe. The Alliance will build on the EU’s leadership in hydrogen technologies, including electrolyzers, hydrogen stations and megawatt-scale fuel cells.

The alliance will support an increase of the production and demand for renewable and low-carbon hydrogen, coordinate action for engaging civil society.

“In 2030, European industry will be a global leader that will responsibly deliver value for society, the environment and the economy. By 2030, the EU will successfully become an innovative, sustainable, competitive and human-centered collaborative economy (…). We will invest heavily in cutting-edge and breakthrough technologies, respect planetary boundaries and biodiversity (…)”.- Final report of the Industry 2030 high level industrial roundtable, “A vision for the European industry until 2030”, June 2019

With more than 500 members, working groups will be set up on various subjects: the production of green or low-carbon hydrogen, its distribution, its use in the industrial, residential and mobility sectors and energy.

All the members of the Alliance, which McPhy is part of, will play a crucial role in the establishment of an industrial hydrogen sector in Europe, by participating in the emergence of an ecosystem of innovative and competitive projects.